Rescue the Underdog
A December romance in June?!  It’s true!  Patch and Jazzy are an “item.”
Pretty amazing considering that it wasn’t that long ago that each had a future that was looking very dark.

You see, Patch and Jazzy each found themselves alone and scared in kill shelters.  It turns out their owners felt they had served their purpose, and were no longer worth the time, trouble, or expense to bother with them any more.

Unfortunately, many people over look senior dogs in the shelter causing each to be looking at a very short future before being euthanatized.  Fortunatelt, fate smiled on them and they came to the attention of a small rescue who immediately recognized they were worth their weight in gold. Given that Jazzy Is on the plump side, it doesn’t take a math genius to figure out that’s a lot of gold! Despite their combined medical issues, there is not greater reward than saving these two deserving dogs and introducing them to the loves of their lives.

What happened next was merely a series of random events which resulted in Jazzy and Patch being fostered in the same home.  For Jazzy, it was love at first sight!  For Patch, well let’s just say he was surprised at being the object of affection but then came to realize that even at 12 years old, he still a stud.

Since then, they’ve been a couple.  Each day, Jazzy will give Patch a good cleaning.  Patch complies.  But if you think Patch calls the shots in the relationship, you’d be wrong.  After cleaning and preparing her boyfriend for the day, it’s not uncommon for Jazzy to bite him at the end just to remind him of who is really in charge.  Patch is old enough and wise enough to know there are times you just leave things be, and this is one of them. Patch is no stranger to saying "Yes, dear".

So here we are: two dogs that were on death’s door now finding love in their golden years.  All they need now is someone who will share their life with them and love and cherish them for the rest of their days.  It’s a real life fairy tale!  They just need someone who will see that they live happily ever after.

These two are examples of why Rescue the Underdog exists.  At the shelter, they would have been put down because of their health complications.  In rescue, we were able to get them the help they needed so that they can have a second chance at life and live their happily ever after in their forever home. 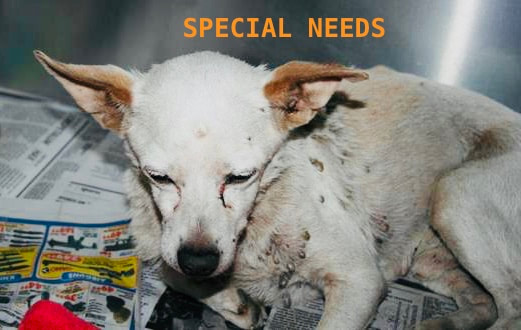 Patch's original story when we rescued him in Aug 2019
This is Patch. He is a male chihuahua terrier mix. Believe it or not, this dog came in with over 500 engorged ticks on him. His loss of blood was so great he needed a blood transfusion. No evidence of injury, but he was hypothermic due to blood loss. Almost unresponsive when brought into the shelter. He was in bad shape and almost had no movement.

Due to the poor state he was in, no other rescue was willing to take him. We saw that this gentle soul clearly needed us, so we took him into our care. When Rescue The Underdog got him, he had a voracious appetite and thirst. However he is so weak he cannot stand without falling over. He is weak and wobbly but has energy now that he didn't have before. He cannot stand up without falling over but at least he is moving around.

He has a strong will to live, but he will still need additional treatments. He has a deep bark and we think he will make it, but he's gone through extreme hardship and will need some time to recover. Right now he still needs medical care and vet visits. Please donate towards his care. He needs blood transfusions from being infested with ticks and possibly other medications. It will be a long recovery for him, but with your help, he will get that second chance in life.
Proudly powered by Weebly